LOS ANGELES (GTA) – When second-in-command Douglas Imhoff sat down for a conversation via Zoom with Holocaust survivor Pinchas Gautier earlier this month, he opened by saying, “I feel like I already know you!”

Although the two never met, Emhoff knew Gutter to some extent.

Just moments before the video call, Imhoff got engaged to Gutter’s interactive biography, asking him questions about his experience in the concentration camps and even listening to Gutter sing “Sher Hamalout,” the song that begins the blessing after meals.

Emhoff was at USC’s Shoah Foundation, where he visited to explore the Center’s Dimensions Project in Testimony, a series of artificial intelligence robots that allow people to interact in real time with survivors of the Holocaust and other genocides.

As a University of Southern California graduate and the first Jewish wife to serve as vice president, Imhoff knew the experience would be special—indeed, overwhelming. But he said the show was “far beyond what I thought it would be.”

It’s impressive, the use of technology,” Imhof told the Jewish Telegraph Agency. “It’s so real. And you really did feel in the room – it really did feel like you were talking to people. It was so engaging.”

The visit was the latest in a series of Jewish events that Emhoff hosted and attended in his official capacity as the second gentleman – and As a proud Jew.

“I never expected my Jewish faith to be such a big deal in this role,” he said. “As it turns out, I was very wrong. And I am glad I was wrong, because it is such a big problem.” 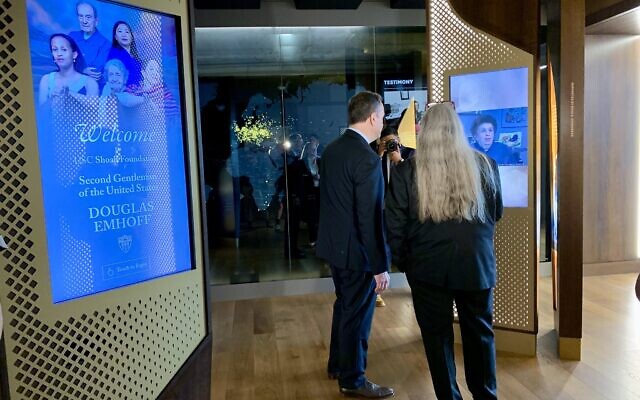 “You see these little kids screaming when I walked into the room like I was a rock star,” Imhoff remembers, laughing. “You really see that representation is important. And knowing that, I take it very seriously. I know it means a lot to a lot of people, as it does to me.”

Emhoff’s presence also meant a lot to the employees at The Shoah Foundation.

“It was fantastic,” Cory Street, the organization’s interim CEO, told JTA. “For me, for the staff, for the university, to have someone in their stature, who understands the importance of what we do here, has a connection to the archive, that was meaningful in terms of how insightful he was and how much he got. That doesn’t always happen.”

Emhoff’s Visit Street began with an introduction to the Center and its work. The institution is close to its goal of reaching 10 million students globally each year, according to Street, and the AI ​​initiative is a leading product. The initiative, which the Shoah Foundation plans to make available through local Holocaust museums around the world, aims to ensure that the common practice of having survivors talk about their experiences can outlive the survivors themselves. 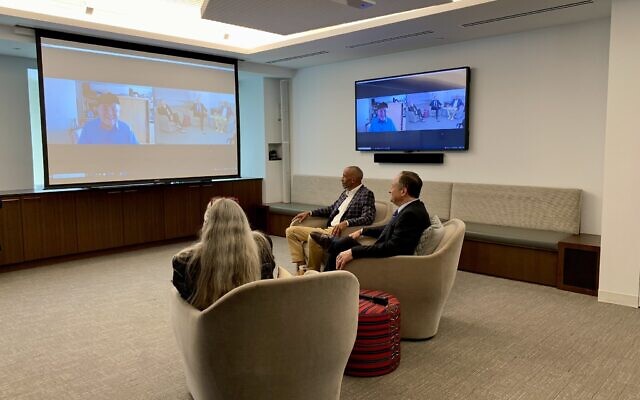 After Imhof was shown a video testimony of a Holocaust survivor from the same Imhof family town in Eastern Europe, it was time to interview Gütter.

Emhoff first spoke with Gutter’s AI introduction, asking him a series of questions about his survival story, his message to students today, and, yes, asking Gutter to sing him a song.

Thank you, Pinchas, Imhoff said on screen with a smile. “I’ll see you in the other room.”

There, the real-life Gutter continued to share his story. He also expressed his gratitude to Imhoff and the Biden administration for their work in combating hate and anti-Semitism.

Gutter spoke about the importance of sharing his story with younger generations and relating his experience to current events. He mentioned Russia’s war on Ukraine several times.

“Take that torch,” Guter said to the students. “Light the world with these fires and make the world a better place.”

Emhoff was clearly influenced by the Gutter story. Both gutters, in fact.

“I love your post about loneliness,” Emhoff told the real-life Gutter Over Zoom. “We all need to stand together and stand united against this epidemic of hate.”

As he reflects on the challenges facing the American Jewish community, Imhoff said Amnesty International’s words expressed “exactly how I feel about these issues.”

“This AI message was really true,” Imhof said. “Hearing his positivity after all he’s been through – all these memories he’s had to live with for so many years, over 70 years – and being so positive and so optimistic, and being willing to share it with the world now through this technology, his story, really, It’s a great “.

So far we have a request. Unlike other news outlets, we have not put in place a paywall. But because the journalism we do is costly, we invite readers whom The Times of Israel has become important to help support our work by joining Times of Israel Society.