When French conceptual artist Daniel Buren showcased his artwork for the first time voile / toile-toile / voile In Germany in 1975, he did it in the water. His signature lines were applied to the sails of nine small boats that participated in the regatta, before the sails were displayed at the Berlin Academy of Arts, in the order in which they crossed the finish line. A play on words voile (sail) and elbow grease (Canvas), “Once it’s installed on the walls of the museum it looks, in a sense, like a painting,” Buren said in 2018.

It’s not just the sail that contemporary artists have used as a canvas. The most daring design in the art boat category has to be Jeff Koons’ “razzle dazzle” design for the collector’s mega yacht Dakis Guano, sinnerIts impressive geometric pattern is inspired by British naval camouflage created to mislead German submarine captains in World War I. In Liverpool, both pioneering Venezuelan plastic artist Carlos Cruz Diez and British pop artist Peter Blake It gave Mercy ships “dazzling camouflage”. Most recently, superyacht maker Sunreef collaborated with Miami-based artist Alexander Mijares—whose fans include David Beckham and Pharrell Williams—on a ship-side mural that was shown at Art Basel Miami in 2019.

However, boats and the fine arts are not necessarily well-versed sea companions, notes Patrick Moloney Harris, who runs with his brother Vincent. Palma sail drawings. While regattas of hand-painted sails have been held in recent years, whether it’s in the Gulf of Trieste (Beaux-Arts Sails) or Buenos Aires (Sails and Arts), companies offer brand sailing from Southampton (ocean art) to San Diego (northern drawings) ), “It’s a very specialized niche,” says Harris of the process dedicated to applying artwork to boat sails. “There are two parts to our business: one is to reproduce large, and often ugly, logos on the sails, like billboards. The other is trying to do something more interesting: working with other artists and with the owners to create something unique for their yachts.”

Harris studied architecture and fine arts in the UK, but his love of sailing pushed him to do so Mallorca in 1997. “I really wanted to paint, and I found an old mansion that had been converted into artist studios in Palma de Mallorca,” he says. “Not long after one of the sailing lofts approached me saying, ‘Can you paint a painting on one of our sails?'”

We found a Lawrence Weiner poem in the sea and we were like, “We’ve got to put this on the boat!”

Since then, the Harris has drawn hundreds of sails. They work from digitally expanded drawings, and feature artwork on canvas. “Then, depending on the project, we might spray on the paint, and we might roll it up, or use a more traditional silkscreen technique…everything is done by hand and eye,” Harris explains. In terms of commissions, notable features include a multi-faceted, gem-shaped design on the sailboats of a J-class yacht and a “brief for painting a wine bottle exploding through a sail” for a 30-meter schooner owned by a local winery. The biggest challenge was the sail for S/Y Aglaia, a 66-meter sailing yacht next to the Wetters shipyard in the Netherlands. “It has a Code Zero sail, which is very large — 77 meters below the leading edge — and semi-transparent,” Harris says. “It’s a bit like working in stained glass.”

The design itself was the work of Norwegian artist and musician Magne Furuholmen, keyboardist for the pop band A-ha and co-writer of a series of ’80s songs. “It was my first time doing something for a yacht’s circuit, but I was drawn to this amazing sailboat because of its aesthetics – the lines, the muted interior, the bold black hull and sails,” he says. “[On the sail] I used the letters in the names of the members of the owner’s family, from which I built a kind of poetic narrative loosely related to Greek myth and voyages.”

Although this remains Voroholmen’s only work on the art of sailing (he has since had several proposals, but did not find them inspiring enough), he is now the Artistic Director of Ocean REV, a research and expedition ship working to “make the ocean healthy again”. “My role there is to coordinate works by emerging Norwegian artists,” says Voorholmen of the collection, which has more than 180 pieces on board, “as well as making sure the artists are directly involved in the research and discourse on the project’s mission.” 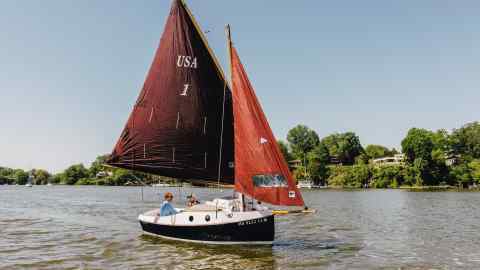 Monaco-based art collector Emilie Pasteur and art consultant Sybille Rochat — founders of Concrete Projects, a charitable organization to support emerging creative talent — have also made a nautical home to an existing artwork. “We were looking at the work of Lawrence Weiner and fell in love with a poem he wrote for his grandson,” Pasteur tells the American artist, whose practice has centered on language and text. “It’s a poem about the sea and we were like, ‘We have to put this on the boat.'”

Pastor and Rochat teamed up with Weiner (who died last year, aged 79) to create a site-specific installation for a 2006 text work that notes wind, rain, and sun. “We sent Emilie Sanlorenzo’s yacht plan to Lawrence Weiner’s studio and they suggested several ways to arrange the work, in the form of vinyl stickers,” Rochat recalls. “Emily decided on the most dangerous kind of formation, with the poem on the walls, but also on the ceiling.”

“It’s really all around you,” says Pasteur, adding that Wiener, who has spent most of his life living in a houseboat in Amsterdam, was thrilled that the work was finished on the water, because the way his work was distributed enables the owner to decide on the show. “You buy a certificate for the piece,” Rochat explains. “I can decide to tattoo it on my skin, and that’s okay.” And if you decide to level up to a sail, there are two brothers in Palma ready to take on the challenge.